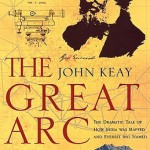 This book covers the story of trigonometrical survey carried out in India during the most part of 19th Century. The project was started by a British surveyor William Lambton and after his death the chief surveyor position was taken over by George Everest. However, surprisingly, people do not remember Lambton at all and Everest was only remembered because Mount Everest was named after him.

The book covers the hardship faced by the surveyors in the then prevailing geographic conditions. A good amount of surveyors died due to various diseases,  more specifically malaria and attacks by tigers and scorpios. The survey team also faced mobility problems as the survey instrument of those times weighed in tons and were difficult to transport.

If you are instructed in history and most specifically geographical history, then this book is a worth read.