Touch The Devil by Jack Higgins 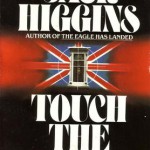 This is the second book in the Liam Devlin series and the story timeline is the cold war period. The British secret service needed the services of Liam Devlin and one of the other X-IRA operative Martin Brosnan to assassinate another X-IRA operative turned terrorist. Martin Brosnan was jailed in a french prison so the first task was to get him freed from there. This part itself turned out to be a thrilling and gripping part. After Martin was freed up before he and Devlin could proceed further towards their intended target, the target found them and injured both of them before kidnapping Martin’s girlfriend, who was also a well known photographer. Then the chase followed and the target was eliminated, but by this time there was still about 10% of the book left, so I was wondering what next and was really pleased to see what comes up next (which I am not going to tell as I do not want to reveal the climax).

A very simple story line – a typical in the spy-thriller types genre, yet very effectively written. The book keeps you griped through out. 3 out of 5 is my rating for this book.