As The Crow Flies 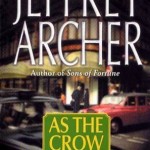 Charlie Trumper, a young boy from East End of London, inherits his grandfather’s barrow and then there is no stopping for him. He ended up setting a retail empire and served as a second Chairman and Life President of the Trumper empire. The story takes the reader through Charlie’s childhood memories, the two world wars and the emergence of vibrant and colorful 60’s and 70’s. All this and the enmity with the Trentham family almost caused Charlie his empire.

I enjoyed this book thoroughly and lived the entire 75 years with Charlie, such is the writing of Jeffrey Archer. This book also gave a glimpse of life in britain during this 75 year period starting from 1900, especially the increasing prices. This will be quite evident when the reader reads what Charlie and his grandfather used to shout while selling fruits and vegetables and what Charlie was shouting at the age of 75. What? Shouting to sell fruits and vegetables …… and Lord Sir Charlie Trumper of Whitechappel ……… Read on this book dear reader to find out this and a lot of other suspense revealing themselves.