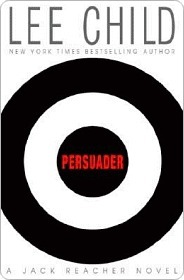 “Persuader” is the 7th book in the Jack Reacher series. Jack Reacher is an X Army MP Major and has been roaming around the US without any commitments. This makes him an ultimate loaner. However there is one serious problem, that wherever he goes, he finds a trouble and gets deep into it.

This time too, he was having a drink and he saw a face that reminds me of a 10 year old case from his Army days, which he thought to have resolved. He pursues his investigation and is caught up in the drama involving drugs, guns and some action. There isn’t any serious bloodshed in this book and most of the book is purely a detective work wherein Reacher ends up working as a bodyguard in order to find out the person responsible for the murder of two of his MPs. As has happened in his other books (right from the first book), Reacher finds time for some non-committal love and romance with one of the DEA officers, Duffy.

I have been liking the Reacher series and for me it have been very difficult to put down the book, once I started a book. The writing style of Lee Child is as usual very descriptive and sometimes I love the second by second description of thought and events, which often lasts couple of pages easily. Lee Child does a a lot of research for writing these books and this is evident from these descriptive passages.

In my opinion, a good read (3 out of 5 stars) and I am seriously looking to start the next one. Perhaps today 🙂