Chasing The Dime by Michael Connelly 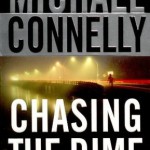 This is an excellent story by Michael Connelly. A little different type of crime plot. The main character of this story is Henry Pierce, who owns a company doing research on molecular computers. Henry’s company has recently achieved a breakthrough, but they are also looking for active private funding. They need to hold off to the patent filing for their innovation until one of the investors have gone through the research and still disagrees for the funding. Meanwhile Henry has recently broken with his girlfriend, Nicole. Nicole who was also working with Henry in his firm is now leaving the firm also and Henry moved away to a different apartment.

With a new phone number at the apartment Henry started receiving calls for some Lily. His curiosity led him to investigate Lily and he found out that she is an escort who is now missing. And then the plot begins. Henry’s curiosity led him to a state where he was being investigate for a murder which he did not commit. However, using some scientific investigative techniques and breaking the problem scientifically Henry was able to uncover the plot to trap him.

I would not divulge more details about it further here. I liked the book, and I hope you would also like it.

Like Loading...
This entry was posted in Book Reviews and tagged book-reviews, crime, fiction. Bookmark the permalink.