The Treasure of Kafur 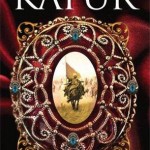 The treasure of Kafur is the second published book of the author. However it was the first one written (as per the notes at the end of the book). This is an historical fiction book based on the time of Mughal Emperor Akbar. Malik Kafur looted treasures during his raids to the Southern India, while he was in the army of Alauddin Khilji. The plot in this book is based on the riches looted during Kafur’s raid and which was hidden somewhere.

The story revolves around a young man Datta who along with his grandmother Ambu is aware of the location of Kafur’s hidden treasure. His grandmother was abducted by a warlord of the South who wanted to conquer the Mughal empire. Datta successfully made alliance with Akbar and together they fought the battle.

The is a simple, yet gripping story. The language is very simple. The starting of the book was quite good. It slows down for couple of chapters after the initial one and then picks up the pace. There are no unnecessary details given anywhere, yet the reader does not feel (s)he is missing anything.

I enjoyed this book and finished it late last night. Looking forward to the next book from the author.

Disclaimer – I received a review copy from the author and my review is not biased by that fact.

Like Loading...
This entry was posted in Book Reviews and tagged book-reviews, fiction, history. Bookmark the permalink.