The Nothing That Is – A Natural History of Zero 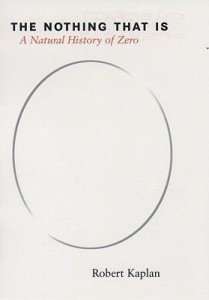 I bought this book from Berkley during one of my visits to San Fransisco. Robert Kaplan has done some good amount of research and have tracked the evolution of some of the fundamental concepts on which modern science and mathematics is based. Zero, a number which itself does not means anything but together with other numbers means a lot. The history of zero has been tracked to ancient Indian number systems where it was called as “shoonya”. It is unfortunate that the invention of zero in India could not be effectively proved since ancient Indians believed in passing knowledge by means of oral lectures and through very concise and crisp Sanskrit versus across generations. The concept of written manuscripts in India came much later and that too most of it is now lost. However, Kaplan has proved that a very advanced level of mathematics existed in India much before all that was rediscovered by the west by quoting various references from the Budhist era which is few centuries BCE.

The best part about this book is that any high school level student can easily read and understand it as it does not use any advanced mathematical concepts.

Like Loading...
This entry was posted in Book Reviews and tagged book-reviews, history, mathematics. Bookmark the permalink.