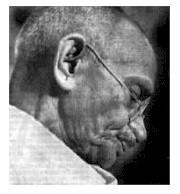 A journalist once asked the late Gandhiji what he thought of the western civilization. Gandhiji replied:

*”Western Civilization? I think it would be a good idea!”

Gandhiji described the whole of western civilization as the “Kingdom of Satan” which pollutes everybody who touches it. Everything which most people consider progress such as industrialization etc were rejected by Gandhiji and he used to pose ancient Indian civilization where the emphesis was on small, self-sufficient and self-governing village communities. He used to say that – “If the machinery craze grows in our country, it will become an unhappy land”
Gandhiji has time and again emphesized on the need for India to return to its own glorious civilization.